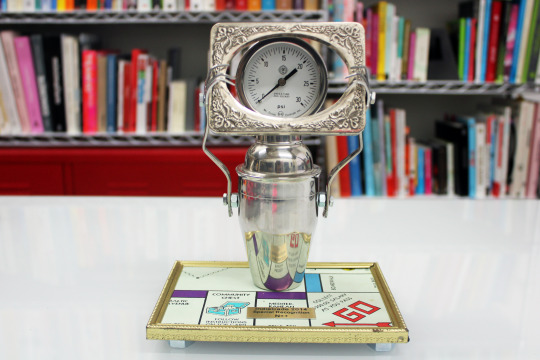 We are incredibly honoured to announce that N++ was given the Special Recognition award at IndieCade 2014! EDIT: check out photos of the award.

The Special Recognition Award goes to N++ – "A true work of art" developed over a decade.

We are surprised and elated — it’s incredibly gratifying for N++ to be recognized like this. Thank you so much to IndieCade, to the judges, to fans of the series, and to everyone who helped make N++ possible; we’re really happy that there are people other than us that believe in what we’re doing 🙂

We’re especially proud that this award recognizes our game as a creative work, and not just well-designed entertainment; we’ve always believed that games are an important medium, and that approaching them as games — as something new and different, without relying on traditions from literature or film — is necessary in order to fully realize their true power and potential. It’s incredibly rewarding to know that we’re not alone in this belief, and moreover, that N++ can be seen as an example of this. That is a huge, huge honour.

This also comes at a great time, as 2014 marks the 10th anniversary of Metanet Software’s official incorporation, and a decade since N was initially made. That’s a lot of history!

Receiving this award from IndieCade specifically also means a great deal to us. In 2006, N won the Audience Award for Best Game at Slamdance, a predecessor of IndieCade. It was an overwhelmingly surprising and positive moment in our lives, and impacted a lot, including the way we felt about N being a “real” game. It helped us understand that making games was potentially something we could try to actually pursue as a career, since at the time we were still working random day jobs and working on games in the evenings and weekends.

So in a sense, N++ receiving this award means we’ve come full circle, and we have an opportunity to appreciate what it means now — and how we’ve grown and changed over the past ten years.

Way back in 2004, we threw a lot of caution to the wind — we started Metanet Software on a whim and released our first game for free! Although much of our initial confidence can perhaps be attributed to youthful arrogance, and although we’re only now recovering from the imposter syndrome brought on by N’s success and plummeting self esteem due to the failure of Robotology, we’ve managed to pull through a lot over the years. The hardest part has been keeping everything in perspective, and finding the motivation to continue even when it seems there’s no reason to.

We’ve learned a ton, both emotionally and technically over the years. We stopped taking risks for a while (because it’s tougher when you have something to lose), which was detrimental (this line of work is all about risk) but we’re getting to a point where we have enough information to take calculated risks. We started working on N++ hoping to make the best version of the game there could possibly be, but as we’ve continued working on it our vision of what exactly that is has grown immensely. We want to devote all our time and energy to it, and have found new avenues to explore even though we thought we had already previously envisioned everything the N world had to offer. It’s exciting. We’re starting to gain back some belief in our skills because of how well we feel N++ is turning out, and we’re more able to understand why we feel that way and what contributions our own actions and talents and personalities are having.

We’re more fully fleshed out people now than we were when we met. Granted, with more scars and fears and many mistakes made, but we also have a lot more experience and a lot that we can be proud of as well. In many ways, N++ embodies and reflects these ten complex years, and it’s both surprising and heart-warming that others can see value in that too. Whatever happens, we will continue to take some risks, make mistakes, and overall to keep trying.

We make the games we do because some ideas speak to us, and we like to experiment and be creative — it’s a path fraught with peril that frequently doesn’t work out well. Suffice it to say, we’ve had many tough times and now recognize just how lucky we are to be able to do what we love — and even though it’s incredibly difficult, to love what we do.

We have had such a great amount of luck over the years, and have met so many people along the way who believe in us and enjoy what we do — and also who inspire us to keep learning and to keep trying. Whatever success we have had, we could not have gotten to this place without the support and love of our friends, family and fans. Thank you, everyone — here’s to another ten years.